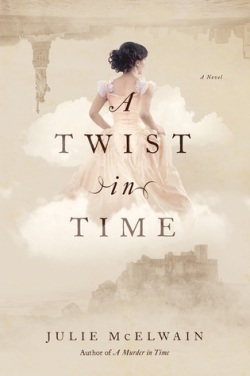 Former FBI agent Kendra Donovan’s attempts to return to the twenty-first century have failed, leaving her stuck at Aldridge Castle in 1815. And her problems have just begun: in London, the Duke of Aldridge’s nephew Alec—Kendra’s confidante and lover—has come under suspicion for murdering his former mistress, Lady Dover, who was found viciously stabbed with a stiletto, her face carved up in a bizarre and brutal way.

As the noose tightens around Alec’s neck, Kendra will do anything to save him, including following every twist and turn through London’s glittering ballrooms, where deception is the norm—and any attempt to uncover the truth will get someone killed.

I really enjoyed A Murder in Time and was eager to pick up the next Kendra Donovan Mystery: It did not disappoint! A Twist in Time is such a fun adventure. Kendra is a strong female character with a clear objective to return to her own time. She remains committed to this goal even when her situation is complicated by a romance while she is stuck in the past. One of the things I appreciate about Julie McElwain’s writing is that her novels are fast-paced and don’t take themselves too seriously. I need that every now and again in a mystery, as so much of this genre is incredibly dark—and that’s just not my cup of tea. A Twist in Time has a gruesome murder at its heart, but I wouldn’t call the novel dark. It’s light in tone, and the romance is pretty clean. This series is for all those, like me, who don’t want to get into the violence and horror of many thrillers and mysteries today. I was hoping to see a bit more resolution in this installment for Kendra, but overall I liked the book a lot. The romance developed nicely in this second book, and I look forward to book three! Fans of Deanna Raybourn will find much to enjoy. Check it out for yourself!